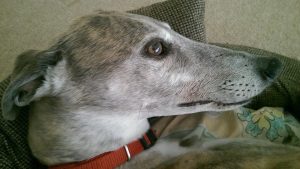 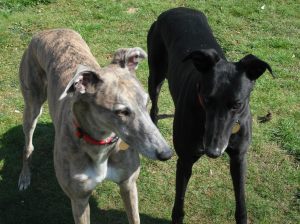 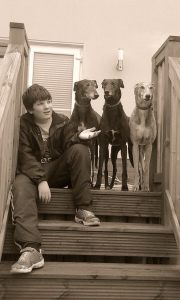 If you’ve never met a greyhound, you might not ‘get’ why we greyhound lovers are so passionate about our poochies but do bear with me and you might have a better insight by the end of this post.

I am allergic to most fluffy creatures; rabbits make me wheeze, horses make me sneeze, most cats and many breeds of dog just make me feel poorly and so, I had resigned myself to a life without pets. My mum and dad had a variety of rescue poochies during my teens and I spent much of the time puffing antihistamine powder up my nose (not a good look when you’re trying to look cool in school), wiping my nose and putting eye drops into my eyes to counteract the dreadful redness. None of this worked, I looked a right mess…

In January 1997, I made two New Year Resolutions.

2) to do A Good Turn. I thought about it and realised if I want to walk the dogs at the National Canine Defence League shelter in Hampstead Marshall, I could kill two birds with the one resolute stone. I rang them, they said ‘Ooh, yes please’, I took an antihistamine tablet and set off to see whether my allergies had improved at all since my school days.

“Hello, you must be Fiona. Would you like to walk those two?”

I peered through the mesh, into the pen which housed two rather large, hairy German Shepherds. They didn’t look terribly friendly and I decided it might not be the most efficacious start to my dog walking career if they were to bite me so I looked up and down the row of pens and asked “What’s that one there, in the cage next to them? He looks a bit sad.”

“Oh that’s Saracen, he’s a greyhound, he’s been with us a while, he was abandoned after he finished racing. If you walk him, make sure you keep him muzzled, he has attacked a few of the smaller dogs”.

Flippin’ ‘eck, this really wasn’t turning out to be the best idea I had ever had, maybe I should just go home and put down a few more backing vocals.

I had never met a greyhound and to be honest, he wasn’t the best example of the the most beautiful breed on the planet (my words, nobody else’s). Some kind soul had made him a coat from an old grey blanket, with proper blanket stitching and everything. It was a very cold January and he was a bit skinny so I’m sure he was very grateful but sartorially speaking, the look was rather spoiled by the two old school ties, sewn together to make the belt tied under his tum which prevented the whole thing from falling off.

“Hello Saracen” I said, wondering whether I was allergic to greyhounds and that, as they say, was THAT.

I was in love.

Totally, head over heels and quite passionately in love. Those beautiful brown eyes bored into mine, he moved his head closer to the mesh fencing at the front of his pen so I could stroke behind his silky ears and I was instantly besotted.

I took Saracen out for his first walk and he spent the whole time nuzzling me, trying to persuade me to remove his muzzle. “I can’t do that, they’ve told me you’re a menace around titchy dogs, stop nagging.” We reached the open fields and I took off his muzzle, making sure to tell him NOT to tell anyone when we got back.

This was the beginning of my love affair with the world’s fastest breed of dog and I soon put pen to paper on the adoption papers, promising I would never sell him or give him away. If there were any problems, I was to take him straight back to the NCDL (now known as Dogs Trust).

Problems? What on earth did they mean? How could this soppy, affectionate hound possibly cause me any problems?

Well, within the first week, he had attacked a tiny Westie and left it for dead (it limped off and I still don’t know what became of it) and on another long walk, I stupidly removed his muzzle and he picked up a passing rabbit sized dog (a toy poodle) and shook it. I had to bash him to make him let it go and to make things worse, the tiny pooch’s owner told me it was blind. Groan…

“Saracen, you horrible dog, how could you do this to me? I bring you home, give you a lovely comfy bed with a duvet, loads of food, treats, water, walks and cuddles and THIS is how you repay me.”  He was the scourge of Greenham; other dog walkers avoided us, tutted a lot and most crossed the road when they saw us approaching.

Then, to add insult to injury (or injury to insult), he bit ME! The very person who had released him from 15 months of living alone in his pen at the NCDL, the person who, before even adopting him, had bought him his very own water/food bowls, lead, muzzle, coat, grooming kit. The person who fully intended taking care of him for the rest of his life. Why had he bitten me? Simply put, Saracen bit me because he was scared. He had clearly been ill treated (he had only one and a half ears, I suspect someone had tried to cut out his identification tattoos) and was always very nervous if I approached him from behind. He often slept with one eye open so he could gauge where I was in relation to his bed. On this occasion, a piece of paper had wafted from my desk and landed close to his nose so when I bent down to retrieve it, VOOM, he lunged and bit me on the arm. I was in shock and really didn’t know what to do next.

I knew he was a lovely dog, I knew he didn’t mean to hurt me (don’t ask how, I just knew) but when I found out I was expecting a baby, everyone said “You HAVE to get rid of that dog, he might harm the baby’. I couldn’t. I just couldn’t turn my back on him and so, I vowed to keep him and the baby separate at all times. I took full responsibility and thankfully, there never were any incidents of any kind and so, eventually, once he realised we were not out to hurt him and the world wasn’t such a bad place, Saracen settled down and became the very dog I knew he was from the start. He loved everyone (and everyone’s dog). I was eventually able to let him off the lead and he would stand, towering over other titchy dogs, wagging his tail sixteen to the dozen, so happy and relaxed, a changed dog.  When we lost him to bone cancer in 2003, I thought I would never ever stop crying, he was a one off, a sweetheart, my beautiful stripey boy.

I will be writing more about greyhounds; they are wonderful animals, they fascinate me and eventually, I hope some of you might even consider adopting one!

For now, TTFN from me and my current poochies, Amber, Rosie and Cleopatra!  Fiona xx