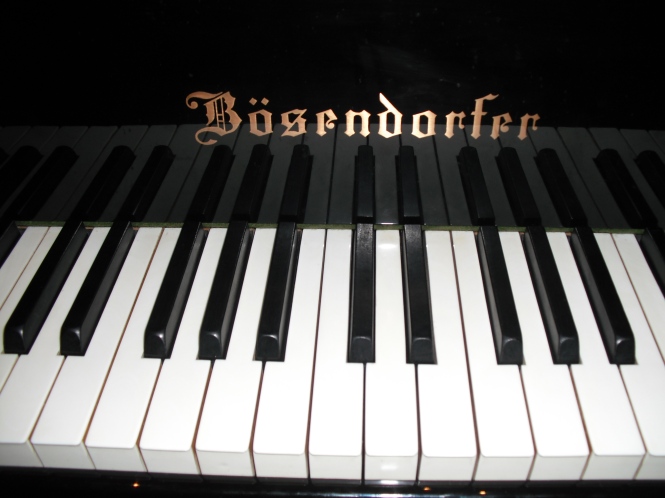 “Erm…there’s something I want to tell you…erm…erm, it’s like this…erm, erm…I want to give up the piano”

That last sound was my father, hitting the roof, not a pretty sight!

It was 1975; I had been having piano lessons since 1966 and I had reached that point of ennui, it just didn’t excite me any more. Learning new pieces didn’t float my boat.  The main reason for this was, I never learned any new pieces, ever.

When I began piano lessons at the tender age of 4, I LOVED them. I loved playing tunes, I loved the little bits of theory my teacher set me each week, I loved the fact she presented me with two chocolates at the end of every lesson (one for me, one for my sister; my sister, mysteriously, never received any) and I just LOVED playing the piano. I took my first exam at the age of 6 and passed with Distinction. Go me!

This all took place in a tiny little village on the Isle of Anglesey, Llanddaniel and not only did I begin learning the piano, it was also the beginning of a life long love affair with the Welsh language. My folks are Irish and I have absolutely no Welsh blood but those early days have stood me in good stead and, despite moving to Berkshire in 1990, I am still fairly fluent and can chat to anyone in Welsh.  Not much use if they are Russian but hey…

So, we moved back to my home town, Cardiff in the early 1970s and once Amanda and I were settled in school, my parents found me a new piano teacher. He was a sweet old soul and we set about learning the Grade 3 Associated Board syllabus. I passed with Distinction. All was calm, all was bright.

I passed Grade 5 with Merit. Not so good. We had studied the same three pieces, scales and arpeggios for a whole year and I was so sick of Beethoven’s sonata in G minor, I wanted to burn it on a bonfire. So, I girded my loins, took a deep breath and broached the subject of NOT playing the piano ever again with my father.  As I said before…’KABOOOOOOM’.

Des (I have called him Des since I was a teenager, everyone calls him Des) was not best pleased, to put it mildly and this was because he knew I was good. He knew I had potential, he knew if he let me give up the piano, I would regret it forever. He was right. So, after the ‘KABOOOOOOM’, we talked a bit. Well, he talked and I listened. Then, one day, at the recording studio where he recorded bands, orchestras, choirs and anyone who wanted to make music, he got chatting to two brothers, one was a trumpet player and one was a pianist.

“Who would you recommend to teach my daughter the piano?” he asked, during the coffee break.

In the blink of an eye, the piano playing brother said “Mary Rees, she teaches at the Castle”. The (now) (Royal) Welsh College of Music and Drama was situated within Cardiff Castle at the time, hence it was known as ‘The Castle’. My dad arranged a meeting/audition with Mary at her beautiful home and I gazed in wonder at her four grand pianos. Four? Gosh, I could only dream of owning one.

“So, what are you going to play for me?” asked Mary. She was so kind to me, I felt nervous but at ease with her.

“Erm, I thought I might play Beethoven’s Sonata in G minor” (fair play, I didn’t know anything else)

I had my first lesson with Mary in January 1976. Within four years, she took me from Grade 5 (with Merit) to diploma standard. I was awarded my LTCL (Licentiate of Trinity College London) performer’s diploma and I returned to the upper sixth with letters after my name. Chuffed? Just a lot.

Mary changed my life. She was a second mum to me during the tough O level and A level years, she listened, she commiserated if I hadn’t had time to practise much because I’d had too much English homework. Although I dedicated ‘A Country Suite’ to my mum and dad, I gave Mary a very special mention.  She died recently and I was devastated, both for her wonderful husband, Frank and for myself and all her other students, who also loved her dearly.

I eventually moved to London to study at the Guildhall School of Music and Drama but there are times I think my playing might have improved to a greater level had I stayed in Cardiff with Mary. She told me, some years ago, that she had missed me terribly when I left her in 1980 but didn’t tell me because she didn’t want to make me feel bad. What might have happened had I stayed and studied with her full time, we will never know but I do know one thing, she was the right teacher at the right time and she really did change my life.