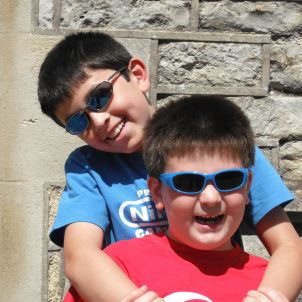 Zachary has high functioning autism. He was diagnosed at the age of 4 years and 3 months and it was the blackest day of my life. We knew he had speech and language problems during the early years i.e. he didn’t say much at all but we thought things might improve. When he was three and a half, I panicked and realised we only had a year to get him ready for school.

Post diagnosis, the prep school Dominic attended simply told us ‘Sorry, we can’t cater for special needs, you’ll be better off in the state system’. We didn’t have a Plan B but a friend said he’d heard Cheam School had had some success with a little girl who had autism. We rang the pre-prep department, left a message and their head teacher called me back. Marion Scott Baker seemed very interested in meeting Zachary and so, Z’s dad and I arranged to take him over. We made sure he had his favourite Transformer and small box of Lego as we knew he wouldn’t say much and needed some sort of entertainment while we chatted to Mrs Scott Baker.

Thankfully, Z was having a good day. When I say a ‘good day’, I mean, he got into the car, didn’t scream a lot, didn’t kick me in the head when I bent down to retrieve toys from the car floor, didn’t lie on the ground refusing to move (hard to imagine now that he’s capable of walking into Pizza Express, asking for a table, ordering the drinks and starters and waiting for us all to arrive). I crossed my fingers and said some prayers.

Z sat on the floor, playing with his Lego and his enormous Transformer. Marion watched with interest and eventually said that, she’d noticed he had very good ‘making’ skills. His speech and language were practically zilch but he did make amazing things with building blocks and Lego. This is very common among autistic boys, they don’t say much but boy they make up for it with their other, non-verbal skills. Zachary was taken over to the pre-prep where he instantly became the most popular boy on the planet and apparently had every boy following him around for the rest of the visit, wanting to play with Optimus Prime. The visit went well and Marion offered Zachary a place in the Reception class, starting in September 2006. I wanted to KISS her!  I was absolutely over the moon, ecstatically happy that she was prepared to take a punt on our rather silent, unpredictable son and give him a chance. The proviso was that we had to provide a 1:1 Learning Support Assistant to be with Zachary, throughout the school day; we agreed and so Marion said she would begin advertising immediately.

Z started school, it was difficult at times. Some people didn’t know much about autism and his silent, black and white take on the world took a little more understanding but, on the whole, things were going swimmingly. If he appeared to be struggling in class, Tracy (his support assistant) would take him out and do something different with him so as not to disrupt the other children. One day, at pick up time, one of the mums asked if I was Zachary’s mum. The first thought, whenever anyone asked that, was ‘Oh no, what’s he done now?’ but in fact, she wanted to tell me that her son and his friends in Year 2 thought Zachary was amazing and used to get out all the Lego and other toys at break, just so they could watch him create something fantastic. He was becoming a pre-prep celebrity! One day, it was announced his teacher was expecting a baby and I think the words were ‘Mrs So-and-So has a baby in her tummy’. He approached her, looking very worried and uttered the now immortal words ‘You ATE a baby?’

Christmas was looming and the staff started organising the Nativity play. They appointed two very accomplished young actors to play Mary and Joseph, a group of boys and girls were given the role of the shepherds, they chose three splendid kings and all was taking shape. What would Zachary be, I wondered and would he cope with the excitement and total change of scene that day?

Zachary was the chicken. No, I didn’t know there was a chicken in the Nativity either (or as we know call it ‘chickum’; Zachary couldn’t pronounce his favourite meal but he could say ‘chickum’ so that’s what we now buy when out shopping).

I sat in the audience, on red alert as ever. Anything could go wrong. He might flip, he might wander off, he might refuse to take part, he might give Joseph (or worse, Mary) a bunch of fives if she annoyed him or took his distraction toy from him. The play began, it was fantastic. Lovely costumes, great acting and then, on came Zachary. Think Big Bird from Sesame Street and you’ll know what I mean. Z has always been quite ‘cuddly’ and he was a real vision. A bright yellow feathered chicken wandering around the stage, oblivious to the content of the play.  His LSA sat in the audience, close to the stage but she had to let him be, they needed to know he could be trusted to take part in things without someone breathing down his neck the whole time.

Well, after he had wandered around the stage, strutting just like a chicken, waved up at his dad and me in the balcony, hidden himself behind Joseph and Mary, peeping across to see if we could see him, he decided he would walk back and stand behind the three kings. Some of the other mums and dads had seen him (trust me, you couldn’t miss him) and it was clear, he was causing quite a bit of merriment but I didn’t want the other children to be upset that he had upstaged them so I pretended not to see him and watched the play intently.

After the play had ended, all the parents met for coffee and mince pies. I could hear the mums and dads saying ‘Did you see the chicken? Wasn’t he hilarious? Especially when he started picking his beak…’

I am going to copy and paste the link to this blog post and send it to Marion Scott Baker. Zachary is now a strapping 5ft 11ns 13 year old lad. He is still in mainstream school, studying French, German, science, maths, English, music, drama and he is a very good drummer. He is regularly complimented on his handwriting (thank you Mrs Moore in Year 3!). Marion and her wonderful pre prep team gave Zachary the best possible start and I will always be indebted to her. Thank you Marion and thank you Cheam School.

2 thoughts on “The Nativity chickum…”